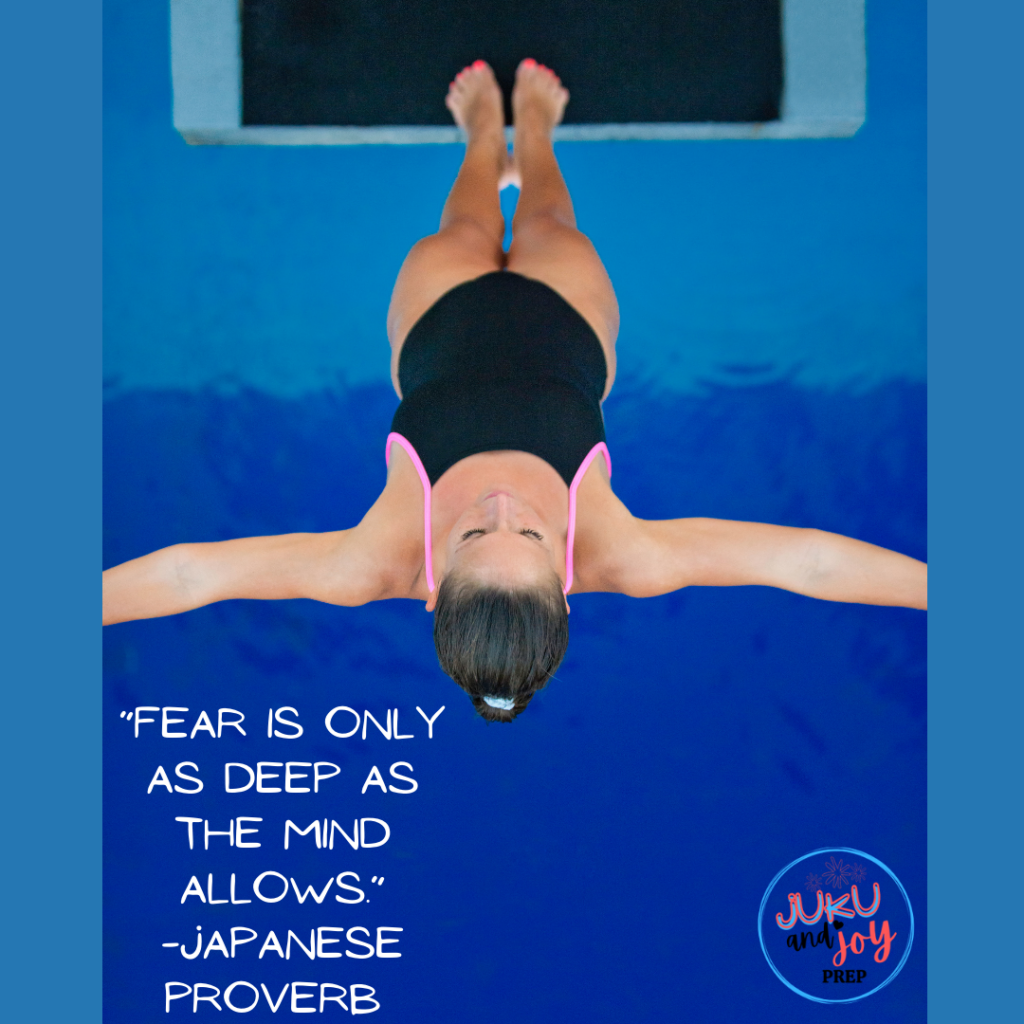 Like a lot of people, I watched a lot of Olympics these past two weeks. As I enjoyed the 10-meter (33 feet!!!) mens’ platform diving final, I was shook when one of the commentators acknowledged the documented fears that even decorated divers face EVERY TIME they stand on the platform before a dive. It shook me— not because I wouldn’t also be scared up there (I would be)— but because the athletes don’t LOOK scared and they certainly don’t behave like they’re scared. Conversely, they move confidently and they fully commit to the task at hand— the task that they have prepared for and rehearsed countless times. When you think about it, fear isn’t the actual enemy. Fear, in itself, doesn’t cause disaster. Our response to it makes ALLLLL the difference though. Imagine if a diver felt afraid and, therefore, DIDN’T fully commit to a dive. That RESPONSE— not fear— would cause real disaster.

I am certainly no Olympic diver, but I experience fear and nerves, for sure. For example, imagine that I am about to do something new or something challenging…maybe I am teaching a new class or giving a speech to a large group. Regardless, it is something that I agreed to do and I am actually looking forward to for one reason or another. And yet….as the ‘thing’ approaches, I get more nervous, more fearful. You know the scene: the butterflies, the knotted stomach, the loss of appetite, the disrupted sleep, and even the trips to the bathroom….I pray, of course, and I think or even verbalize, “I am trying not to be nervous, but….”

One day though, it occurred to me that the problem actually IS my effort at trying NOT to be nervous. For one thing, any time I try NOT to do something, that seems to simply fixate my brain on that thing even MORE. Also, I am learning that I shouldn’t WANT to get RID of nerves or fear; I should embrace those feelings as an advantage, actually: an impetus to work harder, learn more, or prepare more thoroughly. (I am guessing that the fear of hitting his/her head on the diving platform probably compels a platform diver to go ahead and put in that extra hour of training when s/he might rather binge Netflix, ya know?) So, instead of dreading fear or wishing it away when it does show up, I am working to use it as fuel for my ambitions, and approach it with gratitude.

So, whatever your ‘diving platform’ looks like this week— wherever you find yourself standing, about to launch into a four and half-turn somersault with just a dark, deep pool of unknown water waiting beneath you— my prayer is that you put the hard work in so that you can fully commit despite any fear that you feel. Remember, fear isn’t the problem! Feeling fearful or nervous is normal!!! So, be it the first day of school or an upcoming test like the ACT, know that if you feel fear, you’re in the company of really brave, strong people. Harness that fear to your advantage! You’ve got this!